Does the world seem more chaotic these days? What if I told you one definition of chaos is: supreme order inconceivable by human perception. Human perception is, in fact, the thing that is volatile, unpredictable, without order! There’s a card in the Tarot that exemplifies this mind-blowing, yet heart-calming wisdom: 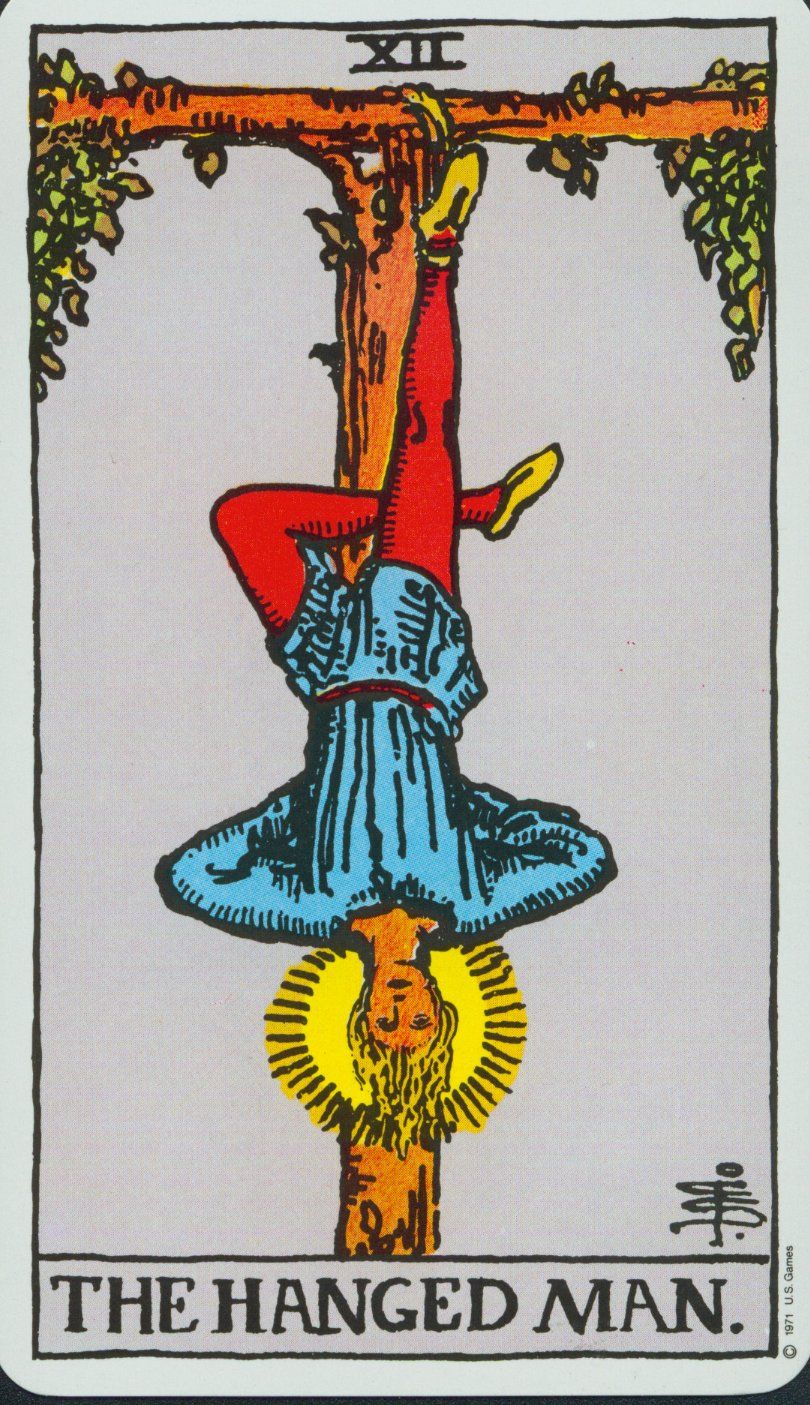 This is the Hanged-Man, who only appears to be hanging upside-down, with a glow of enlightenment about his head and a casual posture about him. (Inverted Vrikshasana anyone?)

Yoga and samadhi (an absolute state of oneness) is in fact a bit of nonsense. It is precisely the senses that must first be brought under control before actual yoga may be practiced. This includes not only the five traditional senses, but also our immaterial (one could say spiritual) senses.

At first we only hear, but eventually we learn to listen. In the beginning we see with our eyes, but eventually we learn to have vision. Early on our body learns to move, but true movement leads to flow. Smelling with the nose in fact leads to an ability to sniff out hidden meaning, to anticipate life’s deep mysteries. The taste we have in our mouth is only symbolic of our inner ability to “taste” the quality of an experience, a relationship, a flavor of life. And sensing with the skin is rather dull compared to the profound power of empathic, ultrasensitive feeling.

Believe it or not, but even these spiritual senses have higher octaves. If we want to, we can learn to perceive the universe in an infinite variety of pleasureful and educational modalities.

Sound like nonsense? I hope so. Both the physical senses and immaterial “nonsenses” must be harnessed if we are to render supreme order out of apparent chaos. Our perception (including emotions, thought, will, identity, and language) becomes, perhaps paradoxically, more reliable when we learn to trust our innate, invisible abilities.

Enlightenment might be a state we reach at some point in the future. More likely however it is a flow. It is a flow of subtle senses subtly perceiving ever-deeper realities. It is what happens when our spiritual values, principles, and expectations marry the constantly changing (even if often unpleasant and confusing) landscapes of our outer environment. This is spirituality in motion, and it’s not quite like it is in the movies.

It’s a bit like swimming (assuming you can swim): a familiar movement in a foreign environment. Under water, you can’t really see, hear, smell, taste, touch or breath! You feel pressure all around you, and must learn to sensitively respond to that stuff, all while making powerful strokes to propel yourself forward.

If you’d like, can pause and tread water to catch you breath and see where you’re going. Ultimately however you’ve got to plunge in again and trust that this foreign, dangerous, watery environment has its own rules and laws.

If you learn the rules of water nature you learn a lot about your own nature, and swimming suddenly becomes natural, comfortable, fun. You learn to love the water, trust it, knowing it as powerful and potentially dangerous, but also intelligence, benevolent, incredible-beauty-in-motion.

This is how the chaos, challenge, change of life can be transmuted into a supremely enjoyable, fluid experience. Again, it’s all about perception, higher sense realities, and the recognition that humanity is like a bridge species between physical and spiritual realities. Enlightenment may be much closer than you think: it just may look, sound, taste, touch, feel a little, well, different.

So keep an open mind and do plenty of psychological inversions. Embrace chaos as order-not-yet-understood, and remember that unity is a full time job. Make a commitment seeing the one-in-all, and the all-in-one, in every situation, and you just might begin to perceive the world you see around you as orderly, safe, beautiful, harmonious, and enjoyable!